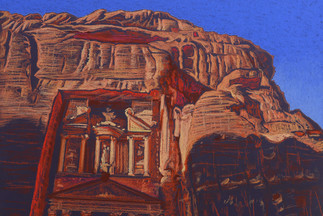 Description of the graphic series " Tbilisi etudes" A series of full- scale sketches of the city was made on a trip with a group of architects in 2016. Tbilisi cant leave anyone indifferent! On the one hand, it is eclectic, and on the other – unusually whole. Houses with old balconies and fancy bars... This old city is like a kind of patchwork quilt, in which every architectural object, every element is a special trace of time, the history of the city.

Abanotubani is a historical district in the center of Tbilisi, known for its complex of baths standing on natural sulfur springs. Built at different times in the XVII—XIX centuries, the current baths form a separate quarter of the city, which is a popular place Rezo Gabriadze Theater. Burdenyuk E. V. Mixed technique, 40-30 cm, 2016

Rezo Gabriadze Theater. Burdenyuk E. V. Mixed technique, 40-30 cm, 2016 Rezo Gabriadze marionette theater is located in the historical district of Old town, on Shavteli street, 13. This is a landmark of the city. The project was created in 1981 in the quarter of ancient buildings. He fit in perfectly with the environment. In 1996, the theater opened a cafe "Do not grieve!", the cafes decor is completely made by Rezo Gabriadze himself. In 2010, a clock tower was added to the theater building. Every hour a Golden-winged angel appears from the painted doors at the top of the tower and strikes the hour with a hammer on the bell. Twice a day, at 12.00 and 19.00 hours, a miniature puppet show "the Cycle of life"is played on the tower. The tile decorations were made by Gabriadze himself.