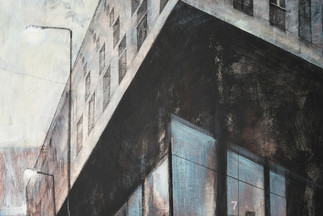 LIVING IN THE SHADOW OF THE WALL The Berlin Wall fell in 1989, the physical Wall is no longer present but an invisible Wall exists between East Berlin and West Berlin. Today, from East to West, people can still recognize the implicit changes around the Wall. These are differences in typology, in urban density and in the habits of residents. The Wall is still there, it is not present in the political power corridors; instead, it is present in every street corner, it visible in every small kitchen in the new housing on the West as well as the old Russian housing blocks in the East. Berlin has become so charming and diverse because its future is built on old divisions, rooted in the mind of men. They formed new and unique phenomena in terms of urban structure and Psychosocial characteristics. The Shadow of the Wall created an invisible power. That invisible power has transformed “man-made institution” into “organic mechanism”, “politics” into “life-processes” - diluting the macro into micro-level of social cohabitation. “The city is what it is because our citizens are what they are”