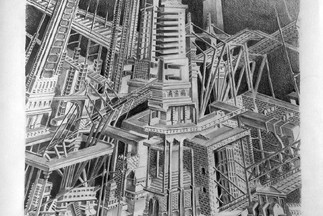 Welcome to Pontemion. It is the year 2500, worlds have been connected like never before. A digital bridge linking one place to another. People can upload and download themselves anywhere. What is life like with this technology? Economic trade has been be faster, the tourism industry grew over the years, and overpopulated places has been decongested. Imagine going around the world in 80 minutes than 80 days, or migrate from the dessert to ice lands in a blink. Introducing the Co-Nexus, the beacon of inter-connectivity, defeating space and time. It is more than a digital portal, but a monument for the community. The Pontemion has linked diverse cultures and races, here are some of the places one can explore: Sheet 1 - "Ikapati" The preservation of anicent tribes in the southeast gave way to resurrecting the lost art of constructing rice terraces. The Co-Nexus will make the construction of villages and different structures easier to transfer materials in hard-to-reach spaces. Icons of deities guard the monument with the belief among its locals that it safeguards the vicinity against physical and spiritual threats. Sheet 2 - "Triazona" Triazona (also known as "Sector-182") is an experimental city featuring symbiotic structures attached to existing buildings. Upgraded space frame units can shape-shift to different forms reaching out to its neighboring cities. It started in the year 2350 since then it has gained a reputation of being one of the most robust and liberated cities in the world. Sheet 3 - "Aegeion" The rising sea levels sparked the possibility of living underwater. Started in 2145, small aquatic pods grew larger over the years thus humans have learned to coexist with Marine life. Because of the organic character of Aegeion buildings, its urban sprawl rendered harmless for the environment. Through the Co-Nexus, such underwater environments can be easily accessed even in far distant locations from the surface.